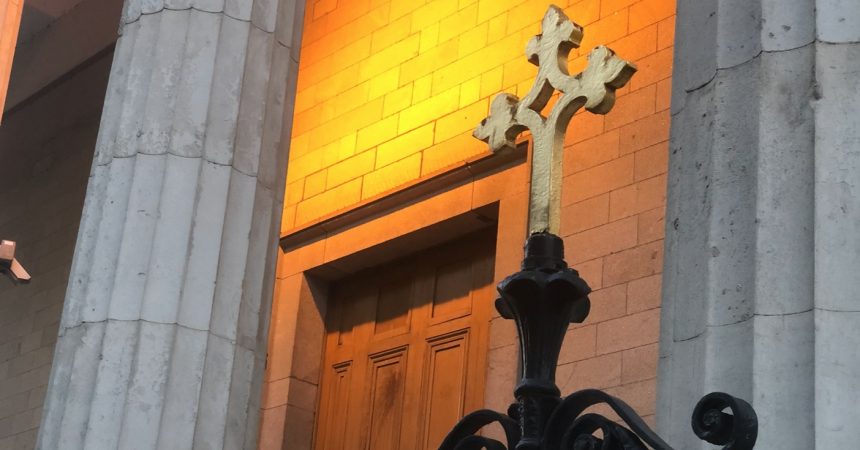 Catholic Archbishop Eamon Martin has called on RTE to immediately remove a television clip which he says it is offensive, outrageous, and blasphemous. He was complaining about RTE’s New Year’s Eve Countdown Show, which included a mock news review by Waterford Whispers News.

The mock news review reported that a deranged John Delaney had launched the Provisional FAI, that a lethal second wave of Fianna Fail was imminent, and that after Brexit the UK had erected a giant fan on the cliffs of Dover for all of the shit to hit. It also included:

“In yet another shocking revelation this year, God became the latest figure to be implicated in ongoing sexual harassment scandals. The five-billion-year-old stood accused of forcing himself on a young middle-Eastern migrant and allegedly impregnating her against her will, before being sentenced to two years in prison with the last 24 months suspended.”

“1. I am shocked that producer/editor of ‘NYE Countdown Show’ @RTE @RTEOne didn’t realise how deeply offensive was a mocking ‘news report’ accusing God of rape & reporting his imprisonment. This outrageous clip should be removed immediately & denounced by all people of goodwill.

2. To broadcast such a deeply offensive and blasphemous clip about God & Our Blessed Mother Mary during the Christmas season on ‘NYE Countdown Show’ on @RTE, @RTEOne & on Eve of the Solemn Feast of Mary, Mother of God is insulting to all Catholics and Christians. @deeforbes_dee”

“A person who is not advocating hatred that constitutes incitement to discrimination, hostility or violence, for example, a person advocating a minority or even offensive interpretation of a religious tenet or historical event, or a person sharing examples of hatred and incitement to report on or raise awareness of the issue, is not to be silenced under article 20 of the ICCPR (or any other provision of human rights law). Such expression is to be protected by the State, even if the State disagrees with or is offended by the expression. There is no “heckler’s veto” in international human rights law.”

The Waterford Whispers News item did not advocate hatred that constitutes incitement to discrimination, hostility or violence. It was a relatively tame comedic mockery of what many people of goodwill believe to be an immoral story in the Christian Bible, in which the creator of the universe impregnates a child who would by today’s standards be considered incapable of giving informed consent.

That is only one example of deeply immoral guidance in the Christian Bible regarding the treatment of women.

But we are not calling on RTE to remove discussions of the Bible from its programmes, or to remove criticism or mockery of atheistic ideas.

What RTE should remove is the daily unpaid advert that it gives to the Catholic Church in the form of the Angelus. And that is not because it is offensive, but because it breaches RTE’s duty to be impartial with regard to religious and non-religious beliefs.

Both religious people and atheists should support the right of other people to see and hear ideas that they personally believe to be offensive, unless the statements are defamatory of identifiable people or inciting discrimination, hostility or violence.

Defending the Right to Offend