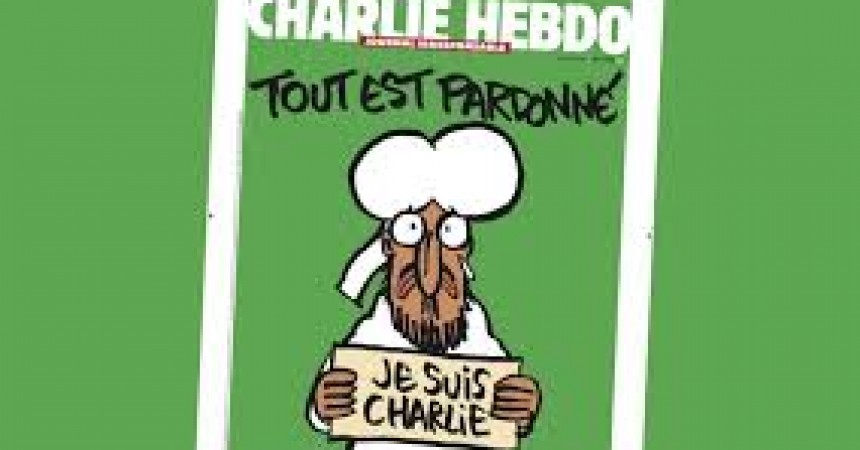 “The poignant cover of the “survivors’ edition” of the magazine, which hits the shelves Wednesday, shows the Prophet Mohammed holding a ‘Je Suis Charlie’ sign. This phrase has become symbolic of the incident, with people all across the world displaying it on signs, t-shirts and stickers in marches over the last few days.

The cover also contains the words: ‘All is forgiven’.

Three million copies of the special edition are being printed and will be made available in 25 countries, translated into 16 languages because of international demand.

Speaking on French radio this morning, the magazine’s lawyer, Richard Malka, said staff will “cede nothing” to extremists seeking to silence them. “We will not give in. The spirit of ‘I am Charlie’ means the right to blaspheme,” Reuters quotes Malka of saying.” – TheJournal.ie

“Amidst the right and proper condemnation of the killings in Paris, surely it is possible that we can ask some questions, and give some context. Or is there also to be a censorship of any debate around this event, which would be a grim irony in itself. Surely, such a debate is worth having, and having urgently, given that Charlie Hebdo now plans to publish further such images and other publications have vowed to do the same, thereby surely creating further unrest – and possible killings.” – Irishcentral.com

“PIC: THIS WEEK’S FRONT COVER OF CHARLIE HEBDO IS INCREDIBLY POWERFUL BY @CONOR HENEGHAN ‘All is forgiven.’
We don’t think this requires a whole lot of comment so we’re just going to leave it here…”

Stephen Fry Evil God – but is it blasphemy

Charlie Hebdo on sale in Ireland – but no media blasphemy