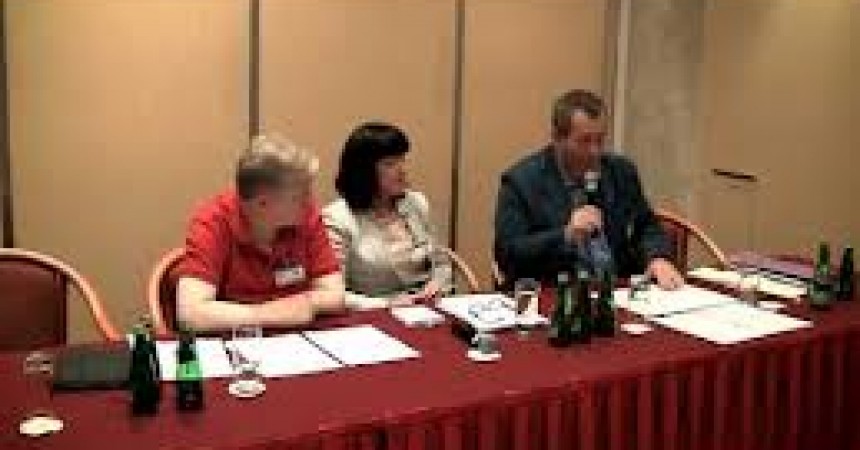 Atheist Ireland speeches about blasphemy at the Constitutional Convention

Michael Nugent, Prof David Nash and Jane Donnelly, on behalf of Atheist Ireland, made the following three speeches today at the Constitutional Convention meeting about blasphemy law. They run from 2:42 – 11:44 on the video.

You have rights, your beliefs do not. That is the essence of freedom of conscience.

For example, we were recently at a conference in Limerick about religious pluralism in Irish schools, at which two Catholic theologians said that atheists are not fully human.

A recent edition of the Catholic newspaper Alive quoted an article from the Telegraph that said that “atheists live short, selfish, stunted little lives, often childless, before they approach hopeless death in despair, and their worthless corpses are chucked in trench.”

Now, that may be intended as satirical – certainly the comment about atheists being not fully human was not meant as satirical – but can you imagine the reaction if an atheist published such comments about religious people?

But here is the point. We are not reacting with outrage. We are not calling for Alive to be banned, or for Catholic theologians to be censored.

We are happy to react in a more proportionate manner than by expressing outrage when people say things that are insensitive to what we believe. And we think that the Constitution and law should encourage religious people to do the same, rather than incentivizing expressions of outrage.

It is also important to remember that blasphemy laws, as well as being discriminatory against atheists, affect religious people too. We in Atheist Ireland campaign for many Christians and Muslims who are victims of blasphemy laws in mostly Islamic states

From the day that Ireland passed our new blasphemy law, we have campaigned tirelessly against it. We have held public meetings, we have lobbied politicians, we have liased with international human rights monitoring bodies.

In Ireland we are used to pretending that laws don’t mean what they say that they mean, and most people are bemused to even discover that we have a blasphemy law. But internationally, where people take laws at face value, they are astonished that a modern western democracy has passed a new blasphemy law in the 21st century.

And they ask us, do we not realise the political support that this gives to Islamic States who infringe on human rights through blasphemy laws and who use the Irish law as part justification at the United Nations.

You were told earlier on by an expert that that was a misquote. It’s not a misquote. Pakistan cited the Irish definition of blasphemy as what it wanted implemented internationally in its proposals to the ad hoc committee on the elaboration of complementary standards in its call for an international instrument preventing the defamation of religion at the United Nations.

That is happening, and it’s not just in Pakistan. Islamic States are using the Irish blasphemy law as an example of it being normal to have such laws.

And when we tell these people that it is our Constitution that requires us to have a law against blasphemy, they ask us how and when can we change that clause in our Constitution.

The answer to that question is here and now. You today have a unique opportunity, as members of this Convention, to recommend to the Irish Government that we replace this anachronism with a positive clause about freedom of expression, modeled on Article 10 of the European Convention of Human Rights.

I have researched and published on blasphemy for 20 years, and have advised a number of western governments for 10 years notably in the UK and Australia.

Very few countries still have blasphemy laws, as blasphemy laws as opposed to religious hatred laws, and these are entirely the remnant of much older laws and the attitudes that go with them. But Ireland’s constitutional requirements have led to a new law – the only newly constructed modern law in the west. As such it is a significant break with past laws (and past laws in Ireland itself).

Although there have been no prosecutions in Ireland, it is clear that this law has victims beyond these shores, as other countries actively cite and view Ireland’s law as a precedent to persecute both the religious and non-religious in their own societies.

It is this which has led the United Nations special Rapporteur on Freedom of Religion (Professor Heiner Bielefeldt) to liaise with me, and to request reports from me on the situation in Ireland, in recognition of the potential impact of Ireland’s law upon other nations.

He has asked me to pass on this message to you, the members of this Convention.

‘There is a growing consensus within the human rights community that we have to move away from anti-blasphemy laws which, as countless examples demonstrate, generally have intimidating effects on religious belief minorities, dissenters, converts and others.

Rather than resorting to blasphemy legislation, what we ought to do is try to overcome stereotypes and prejudices by enhancing interreligious and intercultural communication’

Professor Bielefeldt, myself and others request the removal of Ireland’s Constitutional requirement to have this law, thus ending the damage it currently does to the secular and religious life of this and other nations.

Asia Noreen Bibi is the face of blasphemy laws. She is a 43-year-old Christian mother from Pakistan, who faces execution by hanging after being convicted of blasphemy. And two politicians who supported her have been murdered for doing so.

In April 2009, Dermot Ahern told the Dail that the Irish Constitution obliged him to introduce a new law against blasphemy. Two months later, in June 2009, in Pakistan, Asia Bibi went to fetch water while picking fruits in the fields near her village.

Some Muslim co-workers objected to Asia touching the water bowl because she was a Christian and therefore unclean. Five days later, her co-workers claimed that Asia had made critical comments about Muhammad, and a mob gathered to punish her.

Asia was convicted of blasphemy, and sentenced to hang. When the Governor of Punjab questioned her conviction, he was murdered by one of his own bodyguards. The Minorities Minister in the Government, a Christian, defended her and he was murdered too.

We in Atheist Ireland, along with other human rights campaigners, have sought the release of Asia Bibi, and other such victims. We are regularly told that we in Ireland have just passed our own new blasphemy law, so why are we complaining about theirs?

During all of this, the Pakistani Government was leading the Islamic States at the United Nations in calling for an extension of blasphemy laws around the world, using wording taken directly from Ireland’s new blasphemy law.

In today’s world, our actions in Ireland affect real people elsewhere. Please send a message to Asia Bibi, the face of blasphemy laws, and to her captors, by voting to remove the blasphemy clause from our Constitution.

Blasphemy, God and the Irish Constitution