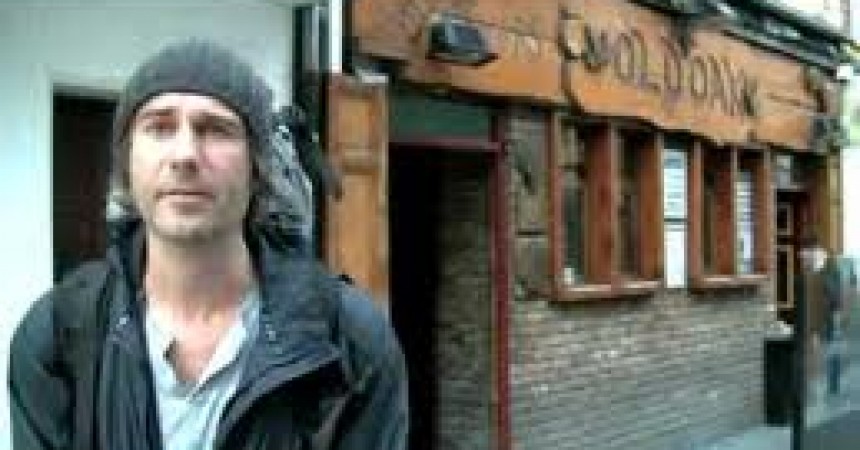 Starting today, Thursday May 6th, Atheist Ireland member Paul Gill will walk the length of Ireland, from Mizen Head in Cork to Malin Head in Donegal, to highlight the need to vote Yes in the coming Irish blasphemy referendum.

In March Justice Minister Dermot Ahern said he will propose a referendum later this year, along with other referendums, to remove the reference to blasphemy from the Constitution. Paul’s walk will encourage people to campaign for, and vote yes in, this referendum.

Appropriately, Paul’s walk started on May 6th, which is International Day of Reason. And to mark the start of Paul’s walk, we now publish 25 quotes on the Irish blasphemy referendum and the right to freedom of expression.

The first five quotes are specifically relevant to the coming referendum, which will ask the Irish people to remove the offence of blasphemy from the Irish Constitution:

“We are of the view that there is no place for the offence of blasphemous libel in a society which respects freedom of speech. The strongest arguments in its favour are (i) that it causes injury to feelings, which is a rather tenuous basis on which to restrict speech, and (ii) that freedom to insult religion would threaten the stability of society by impairing the harmony between the groups, a matter which is open to question in the absence of a prosecution. Indeed, we consider the absence of prosecution to indicate that the publication of blasphemous matter is no longer a social problem.”
Irish Law Reform Commission Report on the Crime of Libel, 1991. Commissioners: The Hon Mr Justice Ronan Keane, Judge of the High Court, President; John F Buckley, Esq, BA, LLB, Solicitor; William R Duncan, Esq, MA, FTCD, Barrister-at-Law, Associate Professor of Law, University of Dublin; Ms Maureen Gaffney, BA, MA, Senior Psychologist, Eastern Health Board; Research Associate, University of Dublin; Simon P O’Leary, Esq, BA, Barrister-at-Law

“The retention of the constitutional offence of blasphemy is not appropriate. The contents of the offence are totally unclear and are potentially at variance with guarantees of free speech and freedom of conscience in a pluralistic society. Moreover, there has been no prosecution for blasphemy in the history of the State. In so far as the protection of religious beliefs and sensibilities is necessary, this is best achieved by carefully defined legislation along the lines of the Prohibition of Incitement to Hatred Act 1989 which applies equally to all religious groups, but which at the same time took care to respect fundamental values of free speech and freedom of conscience.”
Irish Constitution Review Group, 1996. Members: Chairperson Dr TK Whitaker, David Byrne SC, Dr Alpha Connelly, Mary Finlay SC, Dermot Gleeson SC, James Hamilton BL, Mahon Hayes, Gerard Hogan FTCD, BL, Professor Áine Hyland, Dr Finola Kennedy, Professor Michael Laver FTCD, Dr Kathleen Lynch, Diarmaid McGuinness BL, Dr Dermot Nally, Dr Blathna Ruane BL

“The right to freedom of expression implies that it should be allowed to scrutinise, openly debate, and criticise, even harshly and unreasonably, belief systems, opinions, and institutions, as long as this does not amount to advocating hatred against an individual or groups… An insult to a principle or a dogma, or to a representative of a religion, does not necessarily amount to an insult to an individual who believes in that religion…. A democracy must not fear debate, even on the most shocking or anti-democratic ideas. It is through open discussion that these ideas should be countered and the supremacy of democratic values be demonstrated. Mutual understanding and respect can only be achieved through open debate. Persuasion, as opposed to ban or repression, is the most democratic means of preserving fundamental values… Certain religious groups have undoubtedly shown increasing sensitivities in this regard, and have reacted violently to criticism of their religion… Democratic societies must not become hostage to these sensitivities and freedom of expression must not indiscriminately retreat when facing violent reactions… The threshold of sensitivity of these groups and of anyone who would feel offended by the legitimate exercise of the right to freedom of expression should be lowered… The Commission finds: (a) That incitement to hatred, including religious hatred, should be the object of criminal sanctions; (b) That it is neither necessary nor desirable to create an offence of religious insult simpliciter, without the element of incitement to hatred as an essential component. (c) That the offence of blasphemy should be abolished (which is already the case in most European States) and should certainly not be reintroduced.”
Venice Commission Report on Freedom of Expression and Religion, 2008. The Venice Commission advises the Council of Europe on constitutional matters. This report was co-written by the Commission’s Irish member, Finola Flanagan, Director General and Senior Legal Advisor in the Office of the Irish Attorney General.

“We believe that the concept of defamation of religion is not consistent with the promotion and protection of human rights. It can be used to justify arbitrary limitations on, or the denial of, freedom of expression. Indeed, Ireland considers that freedom of expression is a key and inherent element in the manifestation of freedom of thought and conscience and as such is complementary to freedom of religion or belief.”
Micheal Martin, Irish Minister for Foreign Affairs, 2009. The Minister was replying to a parliamentary question about Ireland’s opposition at the UN to an Egyptian motion on combatting defamation of religion. The Islamic States have been trying to have this passed for a decade now. Since Ireland passed the new blasphemy law last year, the Islamic States have adopted the wording of our law as best practice for international blasphemy laws.

The next twenty quotes are about the right to freedom of expression:

“Everyone has the right to freedom of opinion and expression; this right includes freedom to hold opinions without interference and to seek, receive and impart information and ideas through any media and regardless of frontiers.”
Article 19, Universal Declaration of Human Rights

“No-one has the right not to be offended.”
John Cleese

“I am not an ordinary playwright in general practice. I am a specialist in immoral and heretical plays. My reputation has been gained by my persistent struggle to force the public to reconsider its morals.”
George Bernard Shaw

“The problem with writing about religion is that you run the risk of offending sincerely religious people, and then they come after you with machetes.”
Dave Barry

“Freethinkers are those who are willing to use their minds without prejudice and without fearing to understand things that clash with their customs, privileges, or beliefs. This state of mind is not common, but it is essential for right thinking; where it is absent, discussion is apt to become worse than useless.”
Leo Tolstoy, On Life and Essays in Religion

“If I had a large amount of money I should found a hospital for those whose grip upon the world is so tenuous that they can be severely offended by words and phrases yet remain all unoffended by the injustice, violence and oppression that howls daily.”
Stephen Fry

“The sound of tireless voices is the price we pay for the right to hear the music of our own opinions.”
Adlai Stevenson

“Did you ever hear anyone say: That work had better be banned because I might read it and it might be very damaging to me?”
Joseph Henry Jackson

“Everyone has the right to freedom of expression. This right shall include freedom to hold opinions and to receive and impart information and ideas without interference by public authority and regardless of frontiers.”
Article 10, European Convention on Human Rights

“A truly great library contains something within it to offend everyone.”
Jo Godwin

“Once you permit those who are convinced of their own superior rightness to censor and silence and suppress those who hold contrary opinions, just at that moment the citadel has been surrendered.”
Archibald Macleish

“What is freedom of expression? Without the freedom to offend, it ceases to exist.”
Salman Rushdie

“The basic right to freedom of opinion is the most immediate expression of the human personality in society and, as such, is one of the noblest of human rights. It is absolutely basic to a liberal-democratic order because it alone makes possible the constant intellectual exchange and the contest among opinions that form the lifeblood of such an order; it is the matrix, the indispensable condition of nearly every other form of freedom”
German Constitutional Court, Luth case

“Being offended is a natural consequence of leaving the house.”
Fran Lebowitz

“In the long run of history, the censor and the inquisitor have always lost. The only weapon against bad ideas is better ideas.”
Alfred Griswold, New York Times

“We played a gig and we had a song that was offensive to people of the Jewish persuasion, and we led off with it, and they were offended by it, and that was that.”
Santiago Durango

“Free inquiry requires that we tolerate diversity of opinion and that we respect the right of individuals to express their beliefs, however unpopular they may be, without social or legal prohibition or fear of success.”
Paul Kurtz, A Secular Humanist Declaration

“Being offended is part of being in the real world.”
Courtney Love

“I did that joke in Alabama, in Fife, and these three rednecks met me after the show. ‘Hey, buddy! C’mere! Mister funny-man, c’mere! Hey, buddy, we’re Christians, and we don’t like what you said.’ I said: ‘So forgive me.’ Later, when I was hanging from the tree…”
Bill Hicks, Relentless

“But what is wrong with inciting intense dislike of a religion, if the activities or teachings of that religion are so outrageous, irrational or abusive of human rights that they deserve to be disliked intensely? To criticise people for their race is manifestly irrational, but to criticise their religion is surely a right. The freedom to criticise or ridicule ideas – even if they are sincerely held beliefs – is a fundamental freedom.”
Stephen King, Irish Examiner

Update on the campaign against the Irish blasphemy law